My Googling couldn’t discover an existing name for this pattern, so I have taken the liberty of naming it myself. I’ll update if I find one already in use.

The state-diff pattern transforms an imperative interface into a declarative one, allowing the client to write pure, easily testable functions to describe the desired state of a system. This desired state is then compared with the actual state, and it generates imperative actions that reconcile the two. 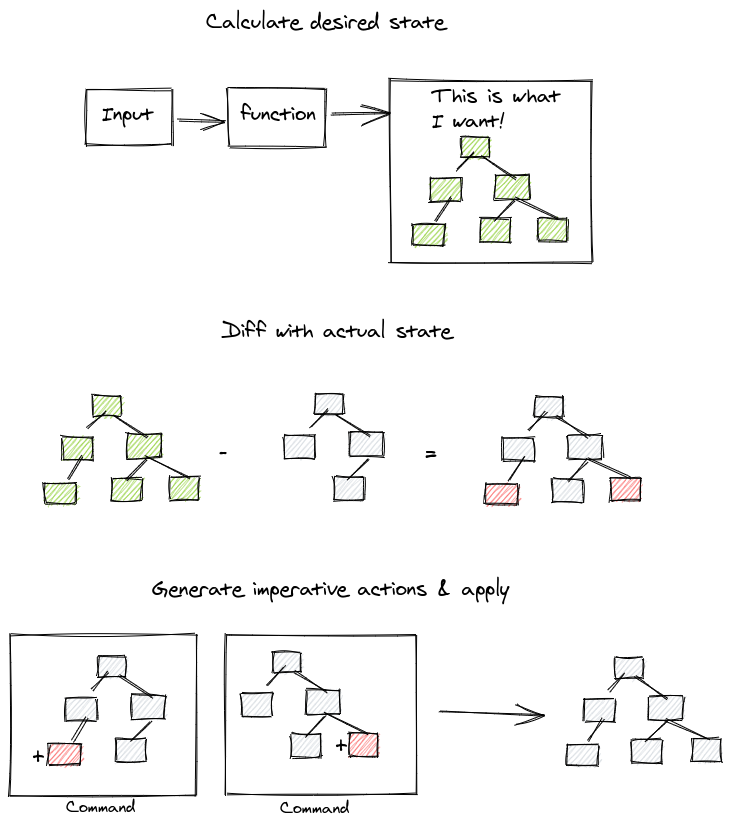 It has become especially useful in UI libraries like React, but it is also used in infrastructure tooling like Terraform, package management, database migrations, and more.

It can help create robust systems that self-correct – if something goes wrong with the underlying state, the next run of the algorithm can correct it. It becomes easy to correct bugs and change behaviour in the pure, declarative layer, saving you from the pain of manually writing state transformations.

A potential downside is that if there is a bug in the diff or imperative layer and the actions don’t bring the actual state in line with the desired state, it can cause escalating problems as each run tries and fails to correct the situation. Also, some implementations, such as React’s virtual DOM, mirror the actual state because it is expensive to check directly. The mirrored state can become out of sync with the actual state.

In my opinion, the trade-off for a robust and testable system is usually worth it, but pay particular attention to the correctness of the core diff and imperative logic.